Are SARS-CoV-2 reinfection and Covid-19 recurrence possible? a case report from Brazil

With the large number of individuals infected and recovered from Covid-19, there is intense discussion about the quality and duration
of the immunity elicited by SARS-CoV-2 infection, including the possibility of disease recurrence. Here we report a case with strong
clinical, epidemiological and laboratorial evidence of, not only reinfection by SARS-CoV-2, but also clinical recurrence of Covid-19.

A little less than a year ago, a new coronavirus, called SARSCoV-2, was identified in a province of China and gave rise to the disease Covid-19, which quickly spread to all continents, generating a pandemic with serious repercussions for global public health1-3. One of the many important questions remaining to be answered regarding Covid-19 disease is whether or not SARS-CoV-2 infections induce long-lasting immunity against the virus. Case reports have identified persistent or recurrent elimination of viral RNA in nasopharyngeal samples, raising the possibility of reinfection by SARS-CoV-24-7. The present case report describes the investigation of a possible SARS-CoV-2 reinfection, notified to the local Epidemiologic Surveillance Service.

Our patient is a 24-year-old white female who works as a nursing technician. She is overweight and her past medical history included sporadically episodes of headache, but no other chronic diseases. Her vaccines were up-to-date according to the national vaccine recommendations. She denied using continuous medications, smoking, drinking alcohol, or using illicit drugs.

On May 4, 2020, she provided nursing care for a colleague presenting with clinical symptoms of Covid-19. Two days later, she complained of headache, more severe than usual, soon followed by the appearance of malaise, adynamia, feverish sensation, sore throat and nasal congestion. By that time, Covid-19 was confirmed in her colleague, by RT-PCR. On the 2nd day of symptoms, she was submitted to nasopharyngeal and oropharyngeal swab sampling for SARS-CoV-2 RT-PCR which failed to detect the virus RNA. As the symptoms persisted and the contact with a confirmed case was evident, the patient was instructed to repeat the tests (Figure 1).

On the 7th day of symptoms, nasopharyngeal and oropharyngeal samplings were repeated and resulted positive for SARS-CoV-2 RT-PCR (Fragments N1 and N2 of SARS-CoV-2, according to the Centers for Disease Control protocol8,9). Among her two family members, one developed flu-like symptoms, but he was not tested for diagnostic confirmation. She has been treated as an outpatient and has been prescribed only symptomatic medications, namely
naproxen and dipyrone. The patient presented with a mild disease with a complete resolution of symptoms within 10 days. She remained home isolated for 14 days. 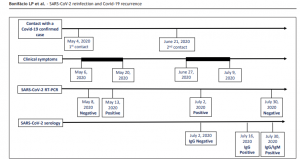 Following her recovery, the patient resumed working and spent 38 days completely asymptomatic. On June 21, two family members develop flu-like symptoms and were lately confirmed as Covid-19 cases by RT-PCR. One of these family members was in home isolation, but the other had recently returned to work activities as a taxi driver. On June 27, she woke up with malaise, myalgia, severe headache, fatigue, weakness, feverish sensation, sore throat, anosmia and dysgeusia. The symptoms worsened, with development of diarrhea and coughing in the following days. On the 5th day of symptoms onset, a SARS-CoV-2 RT-PCR was positive on a new nasopharyngeal and oropharyngeal swab sampling. A rapid test for SARS-CoV-2 antibody detection (IgG/IgM, Immunochromatography, WondfoTM) collected on the same day was negative. Once more, she did not require hospitalization and has been treated with symptomatic medications, only. The patient experienced spontaneous resolution of most of the acute symptoms in 12 days, but persisted with headache and hyposmia until the date of the present investigation (63 days after the onset of symptoms). She also reported that the doctor who provided medical care for her on the second episode developed flu-like symptoms about a week after the contact, and Covid-19 was lately confirmed on him by means of nasopharyngeal RT-PCR. SARS-CoV-2 antibody detection was positive by chemiluminescence (IgG, Chemiluminescence, AbbottTM), collected on the 19th and 33rd days after the new onset of symptoms, and by ELISA (IgM, immunoenzymatic assay – ELISA, VircellTM), collected on the 33rd day after symptoms onset. Clinical and laboratory investigation carried out after the two episodes of infection did not identify any evidence of primary or acquired immunodeficiency (Table 1).

DISCUSSION
Since the beginning of the Covid-19 pandemic, due to several reports of persistent detection of viral RNA by RT-PCR in a nasopharyngeal or oropharyngeal swab, but without recurrence of symptoms, the possibility of SARS-CoV-2 reinfection has been suggested and investigated by different researchers around the world5,6,10,11. A study from the Korean Centers for Disease Control investigating re-positive cases shows that RT-PCRs of cases remained positive for up to 12 weeks. Of those re-positive cases for which symptoms were investigated, 44.7% of patients were symptomatic, but there was no evidence for secondary infections on close contacts of these symptomatic re-positive cases12. There are at least three potential reasons to explain such unusual clinical picture presented by this patient. First of all, there is the possibility of a single persistent infection with recrudescence of symptoms after a while. Although theoretically possible, the fact that she fell ill for the second time about a week after being home exposed to confirmed Covid-19 cases makes this explanation very unlikely.